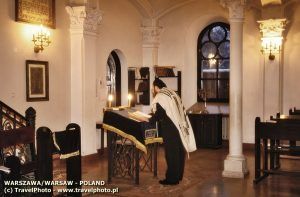 The Jewish population in Warsaw dates back to the 15th century. Poland was then famous for its tolerance, and in the 1930s, the Jewish population comprised about 30% of the city's population, actively participating in its life. The small Próżna Street is one of the places where Jews lived before the war, and the authentic the vibe of the old Warsaw lives on. On the façades of the buildings, you can view open-air exhibitions presenting pictures of the pre-war Jewish population. German occupants walled the Ghetto area, and Jews began starving and dying every day. It all ended with the physical extermination of the Jewish community and the Warsaw Ghetto Uprising in April of 1943.

Jewish Historical Institute ul. Tłomackie 3/5. The building was erected in the vicinity of the Great Synagogue. It housed the Main Judaic Library and the Institute of Jewish Studies. The rich 'Judaica' presents the artistic heritage of Polish Jews and 'The Warsaw Ghetto 1940–1943' Open Mon-Fri 11:00–17:00, Sun 10:00–17, ticket 10 PLN www.jhi.pl;

There is a wooden bridge over a Chłodna, a street excluded from the Ghetto for Jews to allow migration from the 'small' to the 'large' ghetto. Currently, the site features a special art installation - 'A Footbridge of Memory', which restores the memory of those tragic events through multimedia. 22 Chłodna Street.

Don't miss the new and ultra modern POLIN Museum of the History of Polish Jews ul. Anielewicza 6, a permanent exhibition covering the period from the 10th century to contemporary times and present co-existence of the both Poles and Jews. The heroic resistance of the Jews against Nazi Germany is today commemorated by the Monument to the Ghetto Heroes .

Grzybowski Square with the Jewish Theatre, pl. Grzybowski 12/16; the theatre stages play in two languages: Yiddish and Polish. There is also the only pre-war synagogue in the city - the Nożyk Synagogue, ul. Twarda 6. During the war, the Germans converted it into stables. Despite the damage, shortly after the war it regained its original function. Open Mon–Thu 9–20:00, Fri. 9–till dusk Sun 11–20:00, ticket 6 PLN

Best Deal Guarantee | BOOK DIRECT
This website uses cookies to provide services at the highest level. By continuing to use the site, you agree to their use.I agree