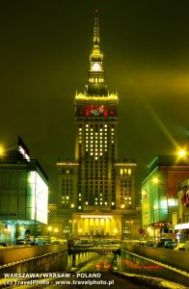 The period between 1945 and 1989 is considered bittersweet in Polish history. Bitter, because Communism controlled everything and everyone, and sweet, because it also provided many enjoyable memories. The architects who rebuilt post-war Warsaw between 1945 and 1956 were forced to design buildings in the style of “social realism”, where according to Marxist ideology the most important concepts were hard work, tradition, and the worker's movement.

Palace of Culture and Science (PKiN - Pałac Kultury i Nauki) Plac Defilad 1 ( 1 Defilad sq). Finished on July 1955, the palace was offered by Josef Stalin himself as a “gift of the Soviet people to the Polish nation.” It is an architectural mix of social realism and Polish historicism, inspired by American art deco skyscrapers.

Standing at 237 m and housing more than 3,000 rooms, the Palace is the tallest building in Poland. Look up to see the second largest clock in Europe and the highest clock tower in the world, and the Congress Hall (Sala Kongresowa) can fit 3,000 people. It has hosted numerous concerts including The Rolling Stones in 1967, who were the first major western rock group to visit behind the Iron Curtain. The Viewing Terrace on the 30th floor has a 360-degree panoramic view of Warsaw. Enter from Marszałkowska Street, ticket 18zł  Open daily from 9:00-20:00; The Museum of Technology - exhibits mostly quirky old-style technology. Enter from Jerozolimskie Avenue and open Tue- Fri 9:00-17:00, Sat-Sun 10:00-17:00, ticket 14PLN. ; - Additionally, the Palace has a post office, cinema, swimming pool, museums, libraries and theatres.

Defilad Square (Plac Defilad): Located in front of the Palace of Culture, it was built for propaganda speeches of the leaders of the People's Republic of Poland. At the time it was created, the square was the largest such space in Europe, and there are now plans to re-develop the entire area.

Marszałkowska Housing District (MDM) (Marszałkowska Dzielnica Mieszkaniowa (MDM): This district was built for wealthy residents after WWII. The construction of the settlement was also a sly opportunity to obstruct and downsize the Church of the Holy Redeemer, which falls on the axis of Marszałkowska Street.

Konstytucji Square (Plac Konstytucji): Its name was meant to commemorate the Stalinist Communist Constitution, which was adopted in 1952. The square is one of the world's largest examples of social realist planning. The most visible elements of the square are the characteristic, monumental lampposts.
The building of the former Planning Commission by the Office of the Council of Ministers pl. Trzech Krzyży 3/5. This building now serves as Ministry, and is the best example of social realism.

The former seat of the Central Committee of the Communist Party: Now The Banking and Financing Center 'Nowy Świat' (Centrum Bankowo-Finansowe 'Nowy Świat') ul. Nowy Świat 6/12: It was once the seat of the Communist authorities called 'the Party House', and was the most defended and secure building in Warsaw. There are many urban legends and myths about it, such as passages connecting it directly to the Palace of Culture and Science, or to a secret train platform. Since 1991 it has been on The Warsaw Stock Exchange.
Muranów residential district: This district was one of the first post-war housing estates. It is built on the site of the Jewish Ghetto, which was totally levelled after the Ghetto Uprising. It was built in social-realistic style with residential buildings, schools, nurseries, kindergartens and cinemas. The monumental gateways are characteristic of this type of “workers paradise”.

Communist Life Museum: Private communist museum. The museum contains typical furniture and everyday appliances such as washing machines and televisions. There are a few different sections, where you can experience propaganda, lifestyle, politics or an ordinary day in the life from the times. The exposition is a perfect background to Communism in Poland, where you can experience the times and discover the absurdities of everyday life. 25 Mińska street 'Soho Factory'. Open 10:00 to 16:00, tickets (with Oki Doki discount) is only 5 PLN. www.adventurewarsaw.com/our-museum

Milk Bars (Bary mleczne): “Milk bars” are canteens that were very common and popular during Communist times. They are still popular for their cheap and cheerful, home-style cooking. The name 'Milk Bar' comes from their typical past menus - mostly dairy and flour dishes. During Communism, meat supplies were restricted. For a few years now, new Milk Bars have opened and become trendier among the young Warsaw crowd.

The menu consists of pierogi, pancakes, milk-based soups, and breaded cutlets. The unique atmosphere (not to mention the design) brings back the memory of past times. Prices are low. Milk bars have limited hours; you can enjoy breakfast and lunch but usually not a late dinner (most are open only until 17:00). Our favourite Milk Bars are: Familijny (ul. Nowy Świat 39); Mleczarnia (Aleje Jerozolimskie 32); Bambino (ul. Krucza 21); Prasowy (ul. Marszałkowska 10/16); Złota Kurka (ul. Marszałkowska 55/73); Ząbkowski (ul. Ząbkowska 2); Rusałka (ul. Floriańska 14)